Galleon is an Ultra Rare card first appeared in AK, then appeared in GAK as a God form animal but his card become Special Rare.

The Lion of Light

One of the last Barbary lions, it doesn't cling to fighting but lives its life in freedom. 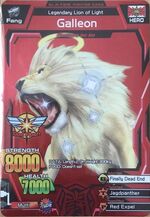 S1 (debut)
Add a photo to this gallery

Retrieved from "https://animalkaiser.fandom.com/wiki/Galleon?oldid=7032"
Community content is available under CC-BY-SA unless otherwise noted.